Written by graham
Share this article
FacebookTwitterPinterest
CulturesTravel In Motion

Impressive is an understatement

Believed to be the oldest Stupa in the world, according to some legends. However, history has it built much later, around the 6th Century.

It gives off a special feeling when you are inside the grounds. It is very calming and one of the few places I have been that whilst, full of people it is very quiet and reflective.

It presents a very significant part of the Skyline of Yangon. It is worth seeing it from many locations from rooftops around the city to give you a better perception of its grandeur and significance.

It is by far the most sacred pagoda in Myanmar. Due to it holding relics of 4 buddhas of the present Kalpa. ( which I guess translates to something like era )

One important thing that stands out in Burmese culture. The majority of Burmese are Theravada Buddhists and they believe it is important to know what day of the week you were born.

For me, that means I am a Lion.

Rudyard Kipling described his 1889 visit to Shwedagon Pagoda in  From Sea to Sea and Other Sketches, Letters of Travel[13]

Then, a golden mystery upheaved itself on the horizon, a beautiful winking wonder that blazed in the sun, of a shape that was neither Muslim dome nor Hindu temple-spire. It stood upon a green knoll, and below it were lines of warehouses, sheds, and mills. Under what new god, thought I, are we irrepressible English sitting now?

There’s the old Shway Dagon’ (pronounced Dagone), said my companion. ‘Confound it!’ But it was not a thing to be sworn at. It explained in the first place why we took Rangoon, and in the second why we pushed on to see what more of rich or rare the land held. Up till that sight my uninstructed eyes could not see that the land differed much in appearance from the Sunderbuns, but the golden dome said: ‘This is Burma, and it will be quite unlike any land you know about.’ ‘It’s a famous old shrine o’ sorts,’ said my companion, ‘and now the Tounghoo-Mandalay line is open, pilgrims are flocking down by the thousand to see it. It lost its big gold top—’thing that they call a ‘htee—in an earthquake: that’s why it’s all hidden by bamboo-work for a third of its height. You should see it when it’s all uncovered. They’re regilding it now 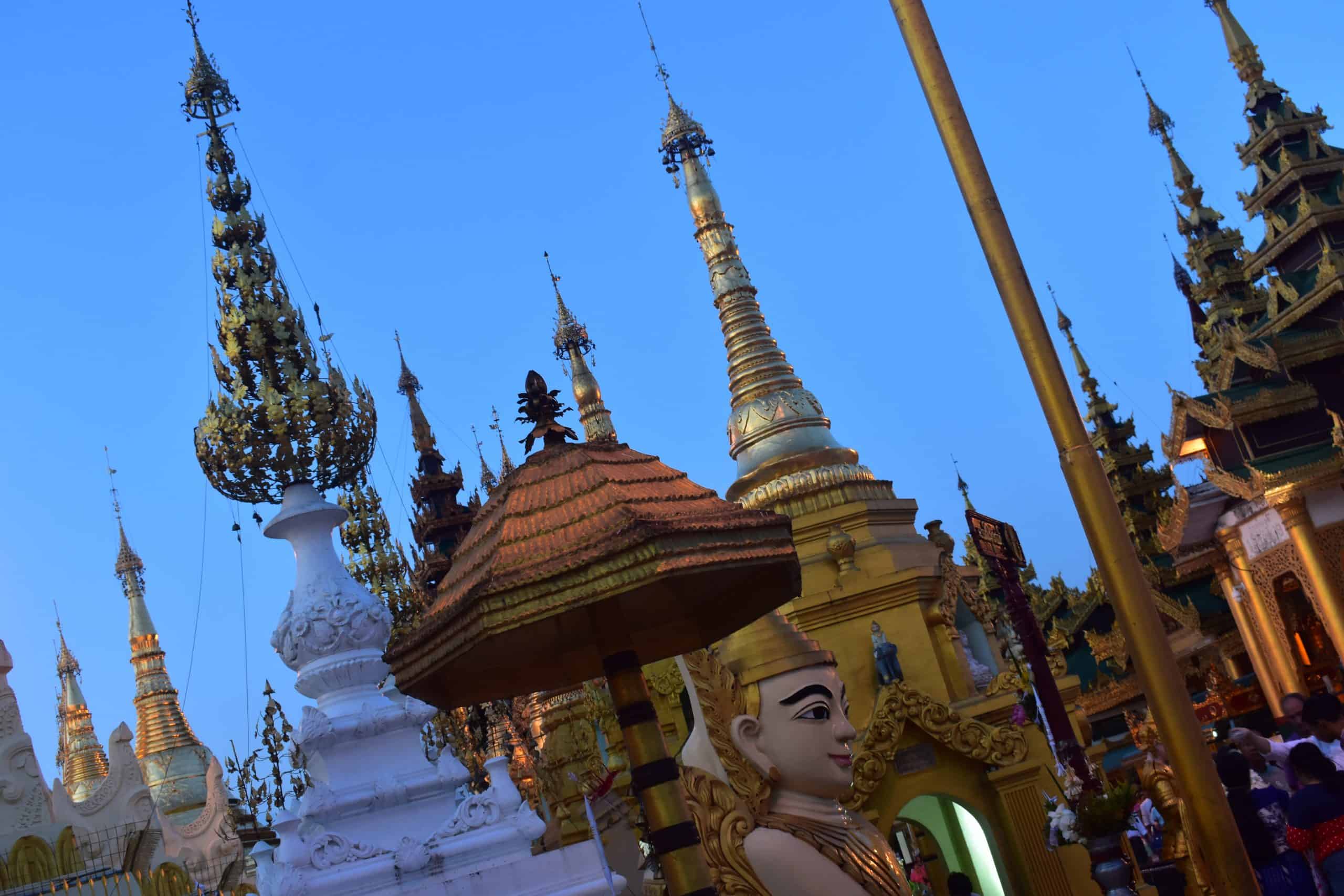 It is impressive at any time but I do recommend visiting late afternoon as the sun is about to set. That way you see it in daylight and as the sunsets and darkness descend. It really is breathtaking to capture this amazingly beautiful temple at this time.